Seattle Mariners second baseman Robinson Cano and Minnesota Twins third baseman Miguel Sano spent some of their holiday season giving back in their native Dominican Republic (DR). The two Major League All-Stars distributed thousands of toys to underprivileged children in 16 batey communities surrounding Quisqueya, San Pedro, as well as in the nearby communities of Los Llanos, Monte Cristi, Aleman, El Soco, and Esperanza. Bateyes are remote villages that grew up around sugar plantations when the sugar industry was dominant in the DR. Poverty levels in these communities remains high, especially since most of the sugar industry left along with jobs. Many of the bateyes still lack basic infrastructure, including basic sanitation and access to basic health services. As a result, the risk of child mortality is higher in these areas than in more developed areas throughout the DR.

The Toy Distribution outreach effort was coordinated in the communities by Elisa Avila, Dominican Republic Country Coordinator for Medicines for Humanity (MFH), the non-profit organization that partners with Players Trust to provide critically needed health services to at risk children and pregnant women in impoverished communities in the DR. This is the fourth year that Robinson Cano and his RC22 Foundation have collaborated with MFH, and the first year that Miguel Sano has partnered with MFH. 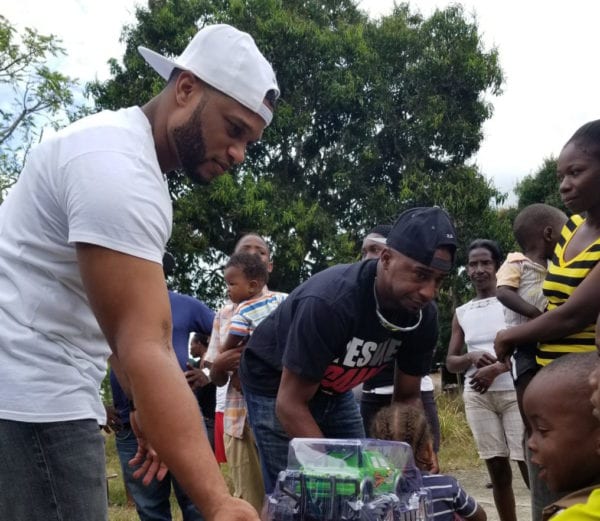 Robinson Cano with a young fan.